Liver cancer is the sixth most commonly diagnosed cancer globally.

Liver cancer causes an estimated 754,000 deaths worldwide annually, which is an increase of 64% from 460,000 in 1990, making it the third leading cause of cancer death after lung and stomach cancers. In 2012, more than 782,000 new cases were diagnosed. According to the World Cancer Research Fund International, about 83% of new liver cancer cases are diagnosed in the developing world.

Liver cancer is the third leading cause of cancer death worldwide. In 2010, liver cancer resulted in an estimated 754,000 deaths worldwide, an increase of 64% from 460,000 in 1990, making it the third leading cause of cancer death worldwide after lung cancer and stomach cancer.1 In the US, the American Cancer Society estimates that there will be 30,640 new cases of liver cancer in 2013, and 21,670 will die as a result.2 The majority of cases of liver cancer are secondary to infections with hepatitis B virus (45%) or hepatitis C virus (26%).1 An additional 20% of liver cancer cases are secondary to alcohol abuse.1 Additional external factors, like aflatoxin are also potent inducers of liver cancer.3 Due to these factors, 80% of the cases of the most common form of liver cancer, hepatocellular carcinoma, occur in sub-saharan Africa or east Asia, mirroring the incidence of hepatitis B.4 In the developed world, increasing rates of obesity and diabetes are now being linked to an increased risk of hepatocellular carcinoma.5,6 Hepatocellular carcinoma accounts for approximately 75% of all liver cancer. Other forms of liver cancer are much less common, hepatoblastoma accounts for approximately 1% of liver cancer and is found primarily in children, tumors of the bile duct, cholagiosarcoma and cholangiocellular cystadenocarcinoma account for 6% of liver cancers, and are often associated with specific insults, like liver flukes. The remaining 13% of liver tumors are predominantly tumors of the vasculature or connective tissue found within the liver, such as angiosarcoma, hemangioendothelioma, embryonal sarcoma, fibrosarcoma, leiomyosarcoma, rhabdomyosarcoma, carcinosarcomas, teratomas, yolk sac tumors, carcinoid tumors and lymphomas.

Hepatocellular carcinoma can present with a variety of symptoms, characterized as symptoms of advanced cirrhosis: Pruritis, jaundice, cachexia, and splenomegaly. In addition, blockage of the portal vein may result in variceal bleeding and the rapid development of ascites and hepatic encephalopathy, due to the increase in blood volume and blood pressure in blood vessels that would normally drain into the portal vein.2

Treatment of hepatocellular carcinoma is dependent on the location and size of the tumor. In patients with advanced liver disease or multifocal cancer, liver transplantation is the best option. For patients with local disease, and a relatively healthy liver, surgical resection is the preferred treatment. Hepatocellular carcinoma is generally resistant to chemotherapy; however, sorafenib may be used in conjunction with transarterial chemoembolization to slow progression of the disease.7

Pharma Models LLC offers a variety of different models of liver cancer. Most commonly used are the sub-cutaneous human tumor xenografts, but most of the cell lines used in these models can also be implanted orthotopically into the liver of immune-compromised mice, or directly into common metastatic sites for human liver cancer – lung, bone and brain.

There are several cell lines that are commonly used as subcutaneous xenografts in immunocompromised mice. Several examples of typical growth curves are shown in Figure 1. In this example, three liver cancer cell lines were implanted subcutaneously in nude mice and the growth of the resulting tumors followed. In this model, treatment would typically begin at a mean tumor volume of 100 mm3, and continue until the negative control tumors reach a volume of 1500 mm3. 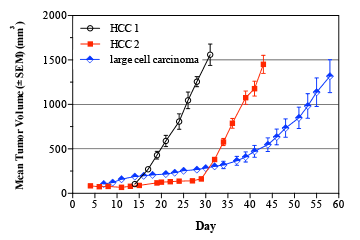 In addition to subcutaneous xenograft models of cancer, several of the cell lines can also be implanted into the liver of mice as an orthotopic model of liver cancer. An image of a fluorescently labeled cancer cell line growing orthotopically is shown in Figure 2. 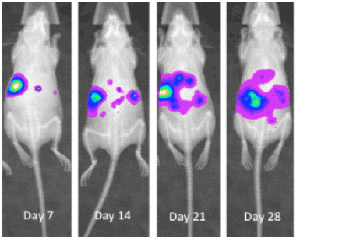 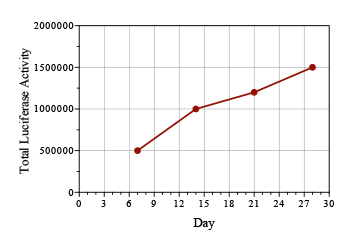 Figure 2: Orthotopic Liver Cancer Model. This image shows a nude mouse with a human liver cancer cell line implanted in the liver. Luciferase expressing cells were implanted by direct injection into the liver of a nude mouse. Tumor growth was visualized with D-luciferin 7, 14, 21 and 28 days post injection.

Metastatic cancer is clinically very important, but animal models of metastatic cancer have traditionally been difficult to standardize and dependent on histological analysis, which is slow and relatively expensive. With the advent of in vivo imaging, and the availability of labeled cell lines, metastatic disease can be readily evaluated in vivo multiple times during the course of a study, allowing for the impact of treatment to be evaluated as the study progresses, and data to be collected and analyzed in real time, rather than long after the end of the study. 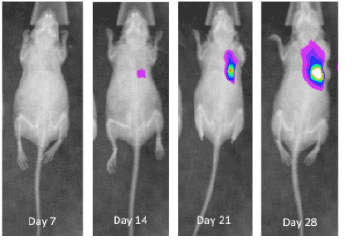 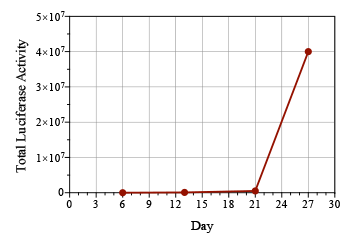