Lymphoma is a cancer of the blood cells like that of leukemia and is the seventh most common type of cancer.

Unlike leukemia, lymphoma consists of solid tumors derived from white blood cells known as lymphoid cells (or lymphocytes). Most lymphomas are currently classified as Hodgkin lymphoma (HL) or non-Hodgkin lymphoma (NHL). Examples of other lymphomas are multiple myeloma and immunoproliferative disease. There are an estimated 566,000 cases of lymphoma worldwide each year, with 300,000 people lymphoma deaths annually.

Although NHL accounts for approximately 90% of all lymphoma, it is divided into a wide variety of subtypes, including precursor T-cell lymphoma, follicular lymphoma, diffuse large B-cell lymphoma, mantle cell lymphoma, Burkitt’s lymphoma and MALT lymphoma. Lymphoma can occur almost anywhere in the body, but is most commonly associated with lymph nodes. The clinical picture is further complicated by the grade and site of the tumor, making treatment very patient specific.

Mantle Cell Lymphoma is an aggressive variety of lymphoma, and is divided into two main cytological variants; typical or blastoid. Typical cases are small to intermediate sized cells with irregular nuclei. Blastoid variants have intermediate to large sized cells with finely dispersed chromatin and are more aggressive in nature. Historically, Mantle Cell Lymphomas have poorer prognoses than other lymphomas. However, recent improvements in chemotherapy have increased median survival from around 3 years to 5-7 years, largely due to the combination of newer drugs, like Rituxan, with conventional combinations of cytotoxic agents.5

The diagnosis of multiple myeloma is based on the key characteristics of the disease; occupation of the bone marrow cavity – the presence of space occupying bone lesions and the production of paraprotein. The expansion of the multiple myeloma in the bone marrow causes a decrease of normal blood cell production, which results in anemia (decrease in red blood cells) and an increase in infections (decrease in white blood cells). These symptoms can be evaluated through blood cell counts and an evaluation of bone marrow function.

The production of paraprotein can cause renal failure due to the high levels of free light chains in the blood. These symptoms are evaluated through measurement of kidney function and the presence of high levels of paraprotein in plasma and urine. The bone lesions frequently cause bone pain, and lead to hypercalcemia due to loss of calcium from the bone. Bone pain is the most frequent symptom of multiple myeloma, typically due to the activation of osteoclasts by the tumor cells, resulting in excess resorption of bone leading to fractures and bone pain. In addition, the changes in the bone can lead to pressure on the nerves including the spinal cord, resulting in a variety of neurological symptoms depending on the nerves affected.

On top of these symptoms, the hypercalcemia can also cause weakness, confusion and fatigue due to its impact on CNS function. Diagnosis of these conditions is confirmed by serum calcium levels and bone X-rays. The staging of multiple myeloma is currently based on serum levels of β2-microglobulin (which increase with stage) and albumin (which decrease with stage).8

Multiple myeloma is a cancer of mature B-lymphocytes (as evidenced by the production of immunoglobulin), and is frequently characterized by a chromosomal translocation between the immunoglobulin heavy chain (chromosome 14 locus q32) and one of a number of oncogenes, resulting in the aberrant expression of the oncogene, and the expression of free light chain (which has no heavy chain to bind to). This translocation is thought to be the initiating event for the majority of multiple myelomas, resulting from an error during the immunoglobulin heavy chain V-D-J recombination that occurs when B-cells become activated.9

Pharma Models LLC offers a variety of different models for lymphoma.  Most frequently used are the sub-cutaneous human tumor xenografts, but the majority of the cell lines used in these models can also be injected into immune-compromised mice to initiate a more clinically relevant form of the disease.

There are several cell lines that are commonly used as subcutaneous xenografts in immunocompromised mice. Several examples of typical growth curves are shown in Figure 1. In this example, three leukemia & lymphoma cell lines were implanted subcutaneously in nude mice and the growth of the resulting tumors followed. In this model, treatment would typically begin at a mean tumor volume of 100 mm3, and continue until the negative control tumors reach a volume of 1500 mm3. 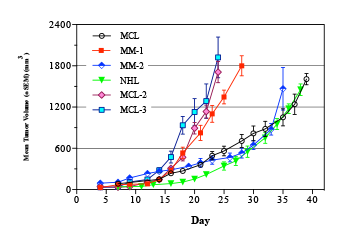 Syngeneic models of cancer allow drugs to be tested in systems with mice that have intact immune systems. Although there are generally fewer cell lines available, the protocol is basically the same as for a human cell line – these cell lines can be implanted subcutaneously, directly into the spleen, or the model can be run as a metastatic model. Please contact us for details of syngeneic lymphoma models. 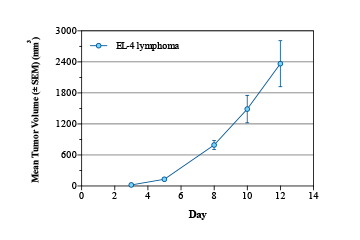