Ovarian cancer is the seventh most common type of cancer in women, with 58% of cases occurring in developing countries.

Ovarian cancer is one of the most deadly cancers because it is largely symptomless and rarely diagnosed before it has spread extensively.1 Symptoms may include bloating, pelvic pain, and abdominal swelling, among others, but these symptoms are shared with a number of other conditions.2 Ovarian cancer commonly spreads to the lining of the abdomen, local lymph nodes, lungs, and liver.3

Signs and symptoms of ovarian cancer are frequently absent in early stages and when do appear, they can be easily mistaken for other disorders and may persist for several months or even years before being recognized and diagnosed. Most typical symptoms include bloating, abdominal or pelvic pain or discomfort, difficulty eating, indigestion, heartburn, nausea, early satiety, and possibly urinary symptoms.

The treatment of ovarian cancer usually begins with surgery, will generally include chemotherapy and may include radiation therapy. The specific course of treatment will be based the type of ovarian cancer and the extent to which it has spread. These factors will also weigh heavily on the outcome.

Pharma Models LLC offers a variety of different models for ovarian cancer. Most frequently used are the sub-cutaneous human tumor xenografts, but the majority of the cell lines used in these models can also be injected intraperitoneally into immune-compromised mice to initiate a more clinically relevant form of the disease.

There are several cell lines that are commonly used as subcutaneous xenografts in immunocompromised mice. Several examples of typical growth curves are shown in Figure 1. In this example, three ovarian cancer cell lines were implanted subcutaneously in nude mice and the growth of the resulting tumors followed. In this model, treatment would typically begin at a mean tumor volume of 100 mm3, and continue until the negative control tumors reach a volume of 1500 mm3. 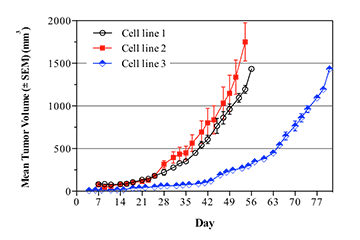 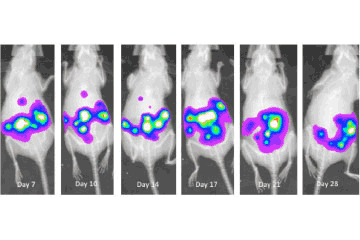