It has a 5-year survival of 5%, with disease mortality remaining as high as 99%. Over 330,000 deaths worldwide are attributed to pancreatic cancer every year, with 338,000 cases diagnosed in 2012. About 55% of these cases occur in the developed world.

The pancreas is a gland that lies adjacent to the stomach and produces hormones like insulin, glucagon and somatostatin that are important for the regulation of digestion, as well as enzymes (including trypsin, chymotrypsin, lipases and amylases) that play a critical role in digestion and are secreted into the duodenum through two pancreatic ducts. Although the pancreas is composed of a large number of different cell types, due to the number of hormones and enzymes it produces, 85% of pancreatic cancers are pancreatic adenocarcinomas1, which are derived from the cells that make digestive enzymes.

Investigations of the genetic based of pancreatic cancer have identified 3 genes that are associated with the hereditary cases: PALB2, BrCa2 and p16. PALB2 and BrCa2 are both involved in the same DNA repair enzyme complex, while p16 plays an important role in regulating the cell cycle and is known tumor suppressor gene. Analysis of non-hereditary cases of pancreatic cancer has identified approximately 100 genes where mutations have been associated with malignant transformation. These genes represent a variety of different functional groups, including cell cycle regulation, cytokines and growth factors, as well as cytokine and growth factor receptor genes.4-6

Pharma Models LLC offers a variety of different models of pancreatic cancer. Most often used are the sub-cutaneous human tumor xenografts, but most of the cell lines used in these models can also be implanted directly into the most common metastatic site for human pancreatic cancer – the liver.

There are several cell lines that are commonly used as subcutaneous xenografts for pancreatic cancer in immunocompromised mice. Several examples of typical growth curves are shown in Figure 1. In these examples, three pancreatic cancer cell lines were implanted subcutaneously in nude mice and the growth of the resulting tumors followed. In this model, treatment would typically begin at a mean tumor volume of 100 mm3, and continue until the negative control tumors reach a volume of 1500 mm3. 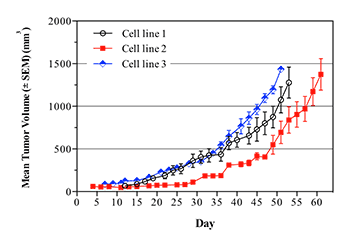 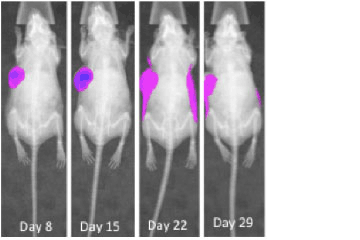 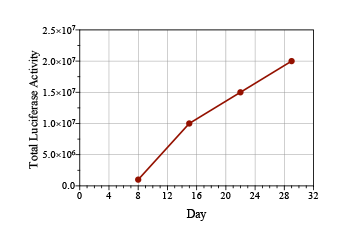 Metastatic cancer is of tremendous clinical importance, though often of less significance in pancreatic carcinoma due to the aggressive nature of the primary cancer. Animal models of metastatic cancer have traditionally been difficult to standardize and dependent on histological analysis, which is slow and relatively expensive. With the advent of in vivo imaging, and the availability of labeled cell lines, metastatic disease can be readily evaluated in vivo multiple times during the course of a study, allowing for the impact of treatment to be evaluated as the study progresses, and data to be collected and analyzed in real time, rather than long after the end of the study. Pancreatic carcinoma cells can be injected directly into the liver, allowing greater standardization and control over the growth of the tumor at the metastatic site. Pharma Models LLC has several pancreatic cancer cell lines that express luciferase and can be used to evaluate the treatment of metastatic pancreatic cancer in the liver (see Figure 3 for examples). 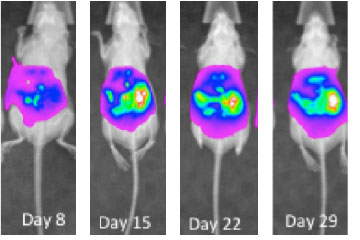 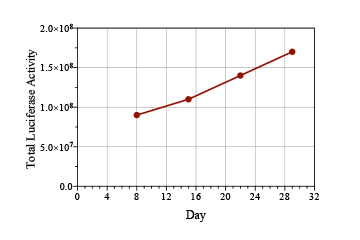