Arthritis causes 750,000 hospitalizations and 36 million ambulatory care visits annually within the United States which are estimated to cost $51 billion.

Arthritis is a disease of the joints that involves inflammation of one or more joints. Approximately 50% of Americans over 65 suffer from some form of arthritis (1). There are many forms arthritis, the most common form is osteoarthritis. Osteoarthritis is a result of trauma or infection of the joint, or simply old age (2). The other major form of arthritis is rheumatoid arthritis, which is an inflammatory disease of autoimmune origin. Arthritis is also commonly observed in patients with a a wide variety of other autoimmune diseases, including psoriasis, hepatitis, Lyme disease, Sjogren’s disease, Hashimoto’s thyroiditis, inflammatory bowel disease (including Crohn’s disease and ulcerative colitis), sarcoidosis, and systemic lupus erythematosus (3).

Although only 9,500 deaths are attributed to arthritis annually, it causes 750,000 hospitalizations and 36 million ambulatory care visits annually within the United States. The total cost of arthritis in the US is estimated to be a total of $86 billion annually, with $51 billion of this attributable to medical costs alone. These figures make the cost of arthritis in both terms of human suffering and in pure financial terms abundantly clear (7-9).

While the causes of osteoarthritis are relatively obvious, the etiology of rheumatoid arthritis and the arthritis associated with the inflammatory diseases is less obvious. The disease appears to start as an inflammatory response that attacks the synovial membrane lining the articulated surfaces of the joints, causeing a thickening of this membrane, and eventually leading to the erosion of the joint cartilage. However, this process can move beyond joints and into other connective tissue within the body, including ligaments, tendons and even tissues like the eye (10). A long list of genetic changes have been associated with rheumatoid arthritis, most notably certain alleles of HLA-DR, a protein that plays a major role in the immune response. Most of the genes implicated in RA play some role in the immune system, suggesting that RA is primarily an immunological disease. The role of the external factor, however, should not be discounted, since the typical age of onset for RA is between 40 and 60 (11).

The mouse models of arthritis offer a way to evaluate potential therapeutic compounds in a relatively quick and cost effective way. To induce arthritis, mice will receive an injection of collagen on day 1 and a second injection approximately 3 weeks later, and will develop swelling of the paws approximately 3 days after the second injection. Mice will be scored daily from day 14 to day 42.

Alternatively mice can receive an injection of a cocktail of antibodies that react with murine type II collagen on Day 1 followed by an injection of adjuvant (LPS) on Day 3. This combination of anti-collagen antibodies and an immune system stimulator will cause the mice to develop swelling of the paws within 72 hrs, which lasts for 2-3 weeks. The mice are evaluated daily between days 5 and 21, and scored for inflammation in each paw. Sample data from this study can be seen in Figure 1, where the mean aggregate score (all four paws scores combined) for each treatment group is seen. Additionally, the arthritis can be visualized in a fluorescent imaging system, using reagents that react with proteases during disease development. An example of this data is shown in Figure 2. 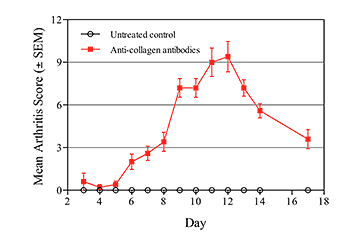 Figure 1: Collagen antibody induced arthritis: DBA-1 mice were injected with a cocktail of five monoclonal antibodies to murine type II collagen on day 1 and a small dose of lipopolysaccharide (LPS) on Day 3 to stimulate the immune system. Each mouse was given a score on each day for each paw, based on a 5 point 0-4 scale. These score were aggregated to give each mouse a daily aggregate arthritis score, which was averaged for each group. Untreated mice did not develop arthritis. Mice that received anti-collagen antibodies developed arthritis approximately one week after the antibody injection. 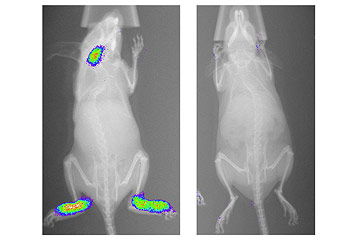