Breast cancer remains the leading cause of cancer in women, accounting for almost a quarter of cancers in women and more than one in ten cancer deaths in women.

Annually, there are an estimated 1.7 million new diagnoses of breast cancer worldwide, and despite recent advances, breast cancer remains a very significant clinical problem. According to the World Health Organization (WHO), over 508,000 women died in 2011 because of breast cancer.

Breast cancer is a form of cancer that originates in the epithelial tissues of the breast. Breast cancer accounts for 22.9% of all cancers in women, causing 458,000 deaths worldwide in 2008 (13.7% of cancer deaths in women).1-3 Most cases of breast cancer occur in the developed world, with an estimated 230,000 cases diagnosed in the United States annually and a similar number in Europe.

Improvements in diagnosis and treatment have raised 5-year survival rates in the developed world to between 80% and 90% in recent years, but survival rates in the developing world remain much lower. The primary risk factor for breast cancer in women is older age – the incidence of breast cancer increases with age. Additional risk factors include higher hormone levels and obesity. There are a number of chemical exposures including diet and smoking that have been linked to breast cancer, and a number of genetic defects have been linked to a higher incidence of breast cancer, most notably BRCA-1 and BRCA-2.4 However, the number of cases of breast cancer that can be directly attributed to genetic factors is low, and it is thought that environmental factors are the major contributor to breast cancer etiology after age and gender.

Traditionally, breast cancer has been graded based on histological characteristics such as degree of tissue organization, the uniformity of the nuclei, with grade increasing as the cells lose the typical characteristics of breast epithelium. More recently, treatment and prognosis have been related to receptor status, where the presence of estrogen receptor (ER), progesterone receptor (PR) and the human epidermal growth factor receptor 2 (also known as Her2, Neu, Erb-2 or CD-40).

Tumors that express the estrogen receptor can be treated with drugs that block this receptor, like tamoxifen, and typically carry a better prognosis.5 Tumors that are positive for Her2/neu generally have a worse prognosis than ER+ tumors and can be treated with antibodies that target Her2/Neu (Herceptin, Pertuzumab)6 and vaccine based approaches with compounds like Neuvax. In addition, these tumors can be treated with drugs that target the Her2/neu signaling pathway through PI3K/akt. Progesterone receptors expression is correlated with positive responses to ER-based therapy, but is not a therapeutic target.7 Tumors that do not express any of these three receptors are referred to as triple negative breast cancer, and represent a diverse group of tumors, including types that are found predominantly in younger women, are typically more aggressive, and consequently have a poor prognosis. However, the triple negative category also includes several rarer forms of breast cancer that do not share this poor prognosis.

In addition to receptor targeted therapies, most breast cancer patients receive some form of radiation therapy to the local area after surgery, followed by a course of conventional chemotherapy with cytotoxic agents, such as cyclophosphamide, Adriamycin (doxorubicin), cisplatin, 5-FU or a taxane (docetaxel or paclitaxel).

Pharma Models LLC offers a variety of different models for breast cancer. Most commonly used are the sub-cutaneous human tumor xenografts, but the majority of the cell lines used in these models can also be implanted orthotopically into the mammary fat pad of immune-compromised mice, or directly into common metastatic sites for human breast cancer – lung, bone and brain. In addition there are murine syngeneic cell lines that allow all of these different types of studies to be performed in mice with intact immune systems.

There are several cell lines that are commonly used as subcutaneous xenografts in immunocompromised mice. Several examples of typical growth curves are shown in Figure 1. In these examples, three breast cancer cell lines were implanted subcutaneously in nude mice and the growth of the resulting tumors followed. In this model, treatment would typically begin at a mean tumor volume of 100 mm3, and continue until the negative control tumors reach a volume of 1500 mm3. 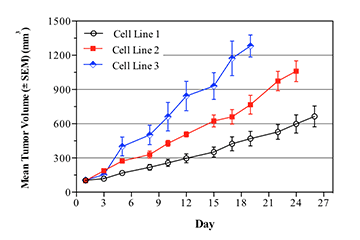 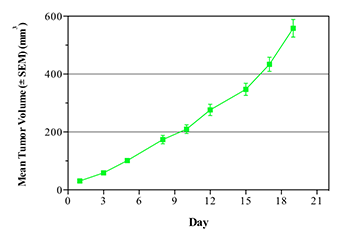 
In addition to subcutaneous xenograft models of breast cancer, several of the cell lines can also be implanted into the mammary fat pad of female mice as an orthotopic model of breast cancer. Due to the position of the tumors in this model, the maximum volume of the tumors is limited to 500 mm3, since larger tumors interfere with the ability of the mouse to move around. An example of the growth of an orthotopic breast cancer model can is shown in Figure 2. Please contact us for more information on this model.

Metastatic breast cancer is of great clinical significance, but animal models of metastatic cancer have traditionally been difficult to standardize and are dependent on histological analysis. With the advent of in vivo imaging, and the availability of labeled cell lines, metastatic disease can be readily evaluated in vivo multiple times during the course of a study, allowing for the impact of treatment to be evaluated as the study progresses, and data to be collected and analyzed in real time, rather than long after the end of the study.

Studies of metastatic breast cancer can be initiated through the implantation of a primary tumor either subcutaneously or in the mammary fat pad (MFP), with subsequent excision, allowing the metastatic tumors to grow. Alternatively, cells can be injected directly into metastatic site, allowing greater standardization and control over the growth of the tumor at the metastatic site. Pharma Models LLC has several breast cancer cell lines that express luciferase and can be used to evaluate the treatment of metastatic breast cancer in the lungs (see Figure 3 for examples), in bone (see Figure 4) or in the brain (Figure 5). Please contact us for more details of these models. 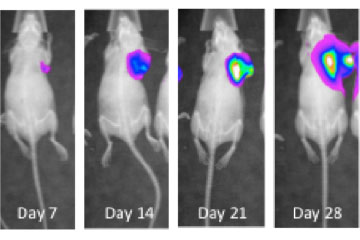 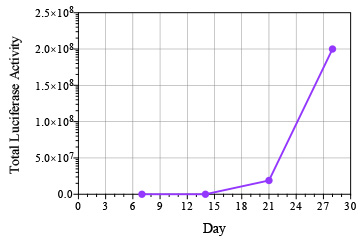 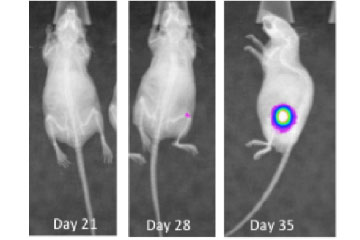 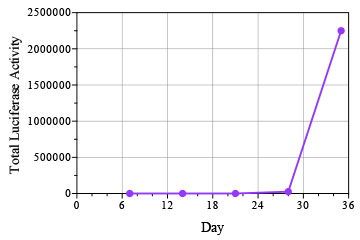 Figure 4. Metastatic Breast Cancer in Bone. Human breast cancer cells expressing luciferase were implanted into the top of the tibia into nude mice and visualized with D-luciferin 7, 14, 21, 28 and 35 days post injection. 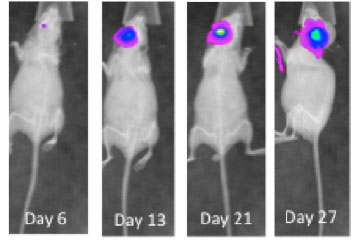 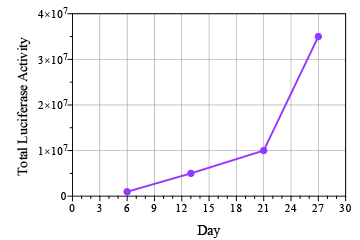 Syngeneic models of cancer allow drugs to be tested in systems with mice that have intact immune systems. Although there are generally fewer cell lines available, the protocol is basically the same as for a human cell line – these cell lines can be implanted subcutaneously, directly into the mammary fat pad, or the model can be run as a metastatic model. Sample data for this model is shown in Figure 6, please contact us for details of orthotopic and metastatic syngeneic breast cancer models. 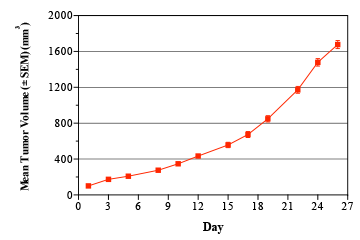 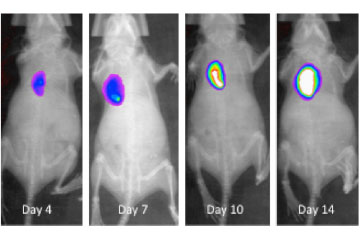