Colorectal cancer is the fourth leading cause of cancer-associated deaths after lung, liver, and stomach cancer.

According to World Cancer Research Fund International (WCRFI), there were 1.4 million new cases diagnosed in 2012. In 2010, there was an estimated 1.23 million cases of colorectal cancer that resulted in an estimated 715,000 deaths worldwide, an increase of 46% from 490,000 in 1990. The Cancer Research Fund International further predicts 2.4 million cases will be diagnosed annually worldwide by 2035.

The fact that radiation therapy is rarely used due to the sensitivity of the intestinal tract to radiation means that chemotherapy is often the treatment of choice after therapy. Additionally, there are a number of syndromes are associated with an increased risk of colorectal cancer, most notably familial adenomatous polyposis (FAP) syndrome, in which virtually all affected individuals will develop colorectal cancer and which accounts for almost 1% of all colorectal cancer.3

FAP results from mutations in the APC (adenomatous polyposis coli) gene that are inherited in an autosomally dominant pattern. The protein produced by the APC gene is involved in the organization of other proteins during cell division and is responsible for ensuring that the correct number of chromosomes in each daughter cell is correct. APC is a large protein and mutations that lead to FAP inactivate the protein, causing it to become non-functional, most often through frameshift mutations that lead to premature stop codons, and truncated protein.4

Lynch syndrome (HPNCC or hereditary nonpolyposis colorectal cancer) is also associated with an increased risk of colorectal cancer and a variety of other cancers (most commonly endometrial, but also ovarian, stomach, small intestine, hepatobiliary tract, urinary tract, brain and skin).5 HPNCC is due to mutations in the APC gene that impairs DNA mismatch repair, and is inherited in an autosomally dominant pattern.

In the non-familial cases of colorectal cancer, research has shown that mutations caused by external factors that reduce the DNA repair capability of the cells and result in genomic instability play a significant role in the development of these cases of colorectal cancer. Detailed analysis of the mutations present in these forms of colorectal cancer have shown that the mutated genes fall into the regulatory pathways associated with the WNT and TGF-b (transforming growth factor-b) signaling pathways, and ultimately to increased activity of MYC. Increased MYC activity leads to unregulated expression of many genes involved in cell proliferation, and is associated with an increase in cell division.7

Symptoms of colorectal cancer vary according to the position of the tumor within the colon, but generally involve changes in the function of the GI tract – constipation, changes in stool caliber, loss of appetite, as well as rectal bleeding and anemia. Colorectal cancer is usually diagnosed by colonoscopy, where a biopsy is taken and evaluated histologically. The extent of disease is then usually determined by CT scan (or other imaging modalities).

Treatment of colorectal cancer generally begins with surgery to remove the tumor and surrounding colon. Radiation therapy is rarely used for colorectal cancer due to the sensitivity of the surrounding normal intestines to radiation damage, consequently, surgery is generally followed by chemotherapy typically with regimes that include 5-fluorouracil and leucovorin. Newer therapeutic strategies incorporate compounds like irinotecan and oxaliplatin.

Pharma Models LLC offers a number of models of colorectal cancer. We have a number of cell lines that are used as subcutaneous human tumor xenografts, and several of these cell lines can also be implanted orthotopically adjacent to the colon of immunocompromised mice, or directly into common metastatic sites for human colorectal cancer – primarily into the liver. In addition there are murine syngeneic cell lines that allow all of these different types of studies to be performed in mice with intact immune systems.

There are a number of human colorectal cell lines that are used as subcutaneous xenografts in immunocompromised mice. Several examples of typical growth curves are shown in Figure 1. In this example, three colorectal cancer cell lines were implanted subcutaneously in nude mice and the growth of the resulting tumors followed. In this model, treatment would typically begin at a mean tumor volume of 100 mm3, and continue until the negative control tumors reach a volume of 1500 mm3. 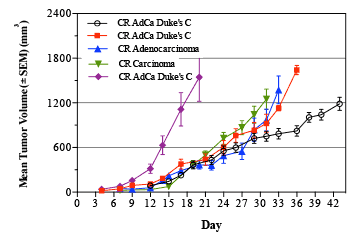 In addition to subcutaneous xenograft models of cancer, cell lines used can also be implanted adjacent to the cecum in mice as an orthotopic model of colorectal cancer. The growth of tumors in this model is evaluated by measuring the size of tumors at necropsy, 2-4 weeks after the initiation of treatment, or through the use of in vivo imaging technology. Figure 2 shows an example of imaging of orthotopic colorectal cancer. Please contact us for more details. 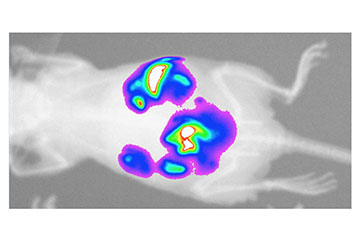 Metastatic cancer is of tremendous clinical importance, but animal models of metastatic cancer have traditionally been difficult to standardize and dependent on histological analysis, which is slow and relatively expensive. With the advent of in vivo imaging, and the availability of labeled cell lines, metastatic disease can be readily evaluated in vivo multiple times during the course of a study, allowing for the impact of treatment to be evaluated as the study progresses, and data to be collected and analyzed in real time, rather than long after the end of the study. 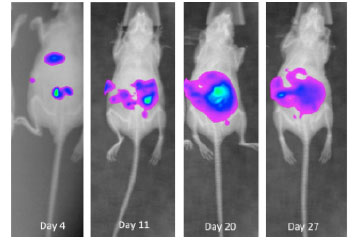 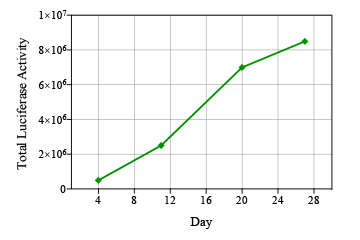 Syngeneic models of cancer allow drugs to be tested in systems with mice that have intact immune systems. Although there are generally fewer cell lines available, the protocol is basically the same as for human cell line – the cell lines can be implanted subcutaneously, directly adjacent to the colon, or into the liver. Please contact us for details of orthotopic and metastatic syngeneic colorectal cancer models. 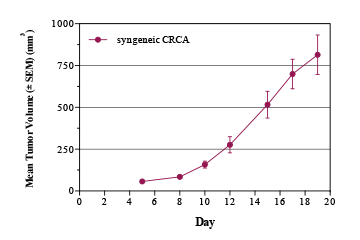