Gliomas are cancers of the glial cells of the nervous system, they account for 80% of primary central nervous system (CNS) tumors and 30% of all cancer within the CNS. There are approximately 23,000 cases of glioma diagnosed annually in the US, and 56,000 worldwide. Of these cancers, approximately 40% will be diagnosed as glioblastomas, the most malignant form of gliomas. For glioblastoma, the 1, 5, and 10-year survival rates are 33.67%, 4.46%, and 2.7% respectively, making it one of the most rapidly fatal of all cancers. While the treatment of glioma and glioblastoma has changed little in decades, the incidence of glioma is increasing at an annual rate of 1.2%.

Glioma is a form of cancer that arises from the glial cells of the brain (or the spinal cord).1 Glial cells are the support cells of the nervous system, providing the environment that allows neurons to function. Gliomas make up about 80% of all malignant intrinsic brain tumors and 30% of all tumors within the brain and central nervous system.2 Gliomas are classified primarily by the type of glial cell from which they are derived. The majority of gliomas derived from astrocytes are classified as astrocytomas, or in the case of the most malignant forms, glioblastomas. Oligodendrogliomas are derived from oligodentrocytes, the cells responsible for the formation of myelin sheaths, and ependymomas are derived from ependymal cells, the ciliated cells that line the ventricles within the brain. Some rare gliomas are known by their location (brain stem gliomas, optic nerve gliomas) because the location of the tumor has a significant bearing on the treatment and prognosis of the tumor.

Gliomas are often graded based on histological features that correlate with malignancy, on a scale of I to IV, with IV being the most malignant. There are two peaks in the incidence of gliomas, one during childhood, and the other during middle age in adulthood. Childhood gliomas are predominantly tumors of the cerebellum, while the gliomas of adulthood are found mostly in the cerebrum. The prognosis for patients with malignant glioma is poor, particularly for adults, and the progression of the disease is so rapid that metastatic glioma is very rarely seen. In children, prognosis is better, but this results in more spread within the nervous system, particularly to the spinal cord and cranial nerves.

The causes of glioma are largely unknown. There have been occasional associations with certain occupations that involve the spraying of chemicals (crop sprayers, auto body-shop workers), but there are generally very few indications of any familial or environmental risks. Pathologically, gliomas are the most highly vascularized of all tumors, other than cancers of the blood vessels themselves, but despite this fact, often have large areas of hypoxia and necrosis, suggesting that the blood vessel growth is poorly organized and frequently non-functional.

Studies of glioma genetics have implicated a number of genes, almost all of which are involved in DNA repair, suggesting that the disruption of DNA repair mechanisms is a critical step in the development of glioma. Unfortunately, these types of genetic changes are much harder to target with novel therapeutics than gene amplifications or activations.3-5

Treatment for glioma generally starts with surgery, and is followed by radiation and chemotherapy, based largely on the histological analysis of the type and grade of glioma. Chemotherapy for glioma has changed little over the past 30 years, relying on alkylating agents (CCNU, temozolomide), topoisomerase inhibitors (etoposide), and inhibitors of mitotic spindle formation (vincristine, vinblastine).

Pharma Models LLC offers two models for glioma. Most commonly used are the sub-cutaneous human tumor xenografts, but the majority of the cell lines used in these models can also be implanted orthotopically into the brain of immune-compromised mice.

There are several cell lines that are commonly used as subcutaneous xenografts in immunocompromised mice. Several examples of typical growth curves are shown in Figure 1. In this example, three glioma cell lines were implanted subcutaneously in nude mice and the growth of the resulting tumors followed. In this model, treatment would typically begin at a mean tumor volume of 100 mm3, and continue until the negative control tumors reach a volume of 1500 mm3. 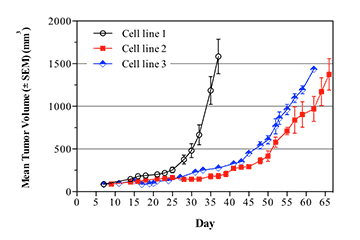 In addition to subcutaneous xenograft models of glioma, Pharma Models LLC has developed several luciferase expressing glioma cell lines that can be implanted into the brain of mice as an orthotopic model of glioma. Please contact us for more information on this model. 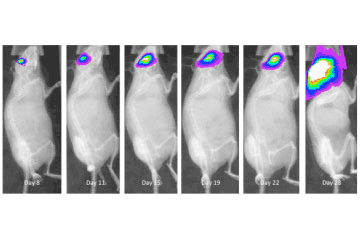