Leukemia is a cancer of blood cells that results in high numbers of abnormal white blood cells.

There are four main types of leukemia: acute lymphoblastic leukemia (ALL), acute myeloid leukemia (AML), chronic lymphocytic leukemia (CLL) and chronic myeloid leukemia (CML). According to the Leukemia & Lymphoma Society (LLS), a person is diagnosed with a blood cancer every 3 minutes. In 2012, it was estimated that more than 352,000 people worldwide were diagnosed with leukemia, and more than 265,000 people died from leukemia.

Acute lymphoblastic leukemia (ALL) is a malignancy of the white blood cells, characterized by a rapid expansion of immature lymphoid cells. ALL is the most common malignancy of childhood, typically between ages 2 and 5, but there is a second peak in incidence among older adults. The incidence of ALL is approximately 40 cases per 1,000,000 population per year worldwide, accounting for around one third of all leukemia.1

In the US, the American Cancer Society estimates that there were 6,070 new cases of ALL in 2013, and 1,430 will die as a result.2 The lifetime incidence in the US is approximately 0.1% overall, with 55.2% of cases occurring in men. The peak incidence of acute lymphoblastic leukemia occurs between the ages of 2 and 5, declining after age 20 then increasing again after age 50. 80% of cases of acute lymphoblastic leukemia occur in children, and are largely due to genetic factors.2

Although ALL is associated with exposure to radiation and to certain chemicals, a large number of cases, particularly in children, involve inherited chromosomal abnormalities, most commonly between chromosomes 12 and 21. Translocations between chromosomes 1 and 19, 9 and 22, and 4 and 11 are also fairly common, and each translocation has its own prognosis and age of presentation. Chromosomal translocations (which are common in childhood leukemia) result in either the activation of an oncogene, or the inactivation of an anti-oncogene. These changes can be directly responsible for the malignancy, or may result in a benign proliferative condition that pre-disposes the individual to further genetic disruption and malignant transformation.3

Symptoms of acute lymphoblastic leukemia are generally associated with the impact that the growing leukemia cells have on the bone marrow; general weakness and fatigue, anemia, frequent or unexplained fever or infection, weight and/or appetite loss, bruising, bone and joint pain, shortness of breath, swollen lymph nodes, liver and/or spleen, edema of lower limbs and/or abdomen, and petechiae. Diagnosis is generally confirmed with a blood smear and bone marrow biopsy, demonstrating large numbers of immature lymphocytes, which can be further classified into B-cell, Pre-T or Pre-B depending on the expression of specific markers for those cell types. Pre-B and Pre-T cells express the enzyme TdT (terminal deoxytransferase) which is required for the rearrangement of immunoglobulin and T-cell receptor genes during maturation in both lineages, but not IgG (immunoglobulin G – found only in mature B-cells). Pre-B and Pre-T leukemias are differentiated by the expression of lineage specific antigens. B-cell ALL is characterized by the presence of IgG, absence of TdT, and presence of B-cell lineage antigen.4

Treatment of acute lymphoblastic leukemia generally begins with chemotherapy to reduce in the number of leukemia cells bone marrow. This stage of therapy will usually combine a steroid (prednisolone or dexamethasone), with vincristine (a mitotic inhibitor) or asparaginase (an enzyme that destroys the essential amino acid asparagine, which ALL cells are unable to synthesize), and a topoisomerase inhibitor (typically daunorubicin). Once the presence of ALL cells in the bone marrow has been reduced to 5% or lower, the chemotherapy is increased and expanded to included additional cytotoxic agents in combination. The final phase of chemotherapy involves maintenance doses of the same agents, often given using a sub-cutaneous reservoir. This phase of therapy lasts for 3 years in boys, and 2 years in girls and adults. Radiation therapy is rarely used, but can be used to target deposits in boney areas, or for patients with a high disease burden.5

The median age at diagnosis is 63 years, and AML is the most common acute leukemia in adults, and relatively rare in children.7 The diagnosis of AML is generally based presentation with anemia and/or thrombocytopenia, followed by a bone marrow aspirate or biopsy revealing the presence of the leukemia cells, and to differentiate AML from ALL (acute lymphoblastic leukemia). The expansion of the AML cells in the bone marrow causes a decrease of normal blood cell production, which results in anemia (decrease in red blood cells) and an increase in infections (decrease in white blood cells).8 The causes and risks for acquiring AML include prior radiation or chemotherapy for cancer, where the highest risk is 3-5 years post exposure,9 but also include a hereditary risk, as well as pre-leukemic disorders such as myelodysplastic syndrome (MDS) and myeloproliferative disease (MPS) 10

Acute myeloid leukemia has been sub-divided in a number of classification systems, typically into about 9 sub-types, usually based on a cytogenetic analysis of chromosomal translocations, inversions and/or deletions. Prognosis varies considerably depending on sub-type, and successful treatment can be highly dependent on correct classification. The most critical identification that can be made is the t(15:17) translocation that characterizes acute promyelocytic leukemia, which can be successfully treated with all-trans retinoic acid, and additional chemotherapeutic agents.11 Treatment for other sub-types of AML begins with cytarabine (ara-C) and an anthracycline. For patients with sub-types of AML with relatively good prognoses, this will be followed up with several additional courses of chemotherapy, while patients with relatively poor-prognosis subtypes will be considered for stem cell (bone marrow) transplantation.12 The five year survival rate varies from 15-70% depending on sub-type, with overall survival rates in the 20-45% range, rising to as high as 98% in cases of acute promyelocytic leukemia.13-15 Internal tandem duplications of the Flt-3 gene (Flt3-ITD) have been shown to be associated with a particularly poor prognosis in cases of AML.16

Chronic lymphocytic leukemia (CLL) is found almost exclusively in older adults. There are two basic variants of CLL, the most common which is slow growing and a less common variant which is considerably more aggressive. Most research has focused on identifying the faster growing form and trying to develop potential interventions for it. Mutations in three genes; NOTCH1, SF3B1 and BIRC3, have been associated with rapid disease progression and poor prognosis, and these genes are the dominant area of interest in research into potential therapies for CLL.

Chronic myeloid leukemia (CML) occurs predominantly in adults, and proceeds through two phases – a chronic phase and a blast crisis. During the chronic cells, the leukemia cells appear to be immature, and relatively slow growing myeloid cells, but during the blast crisis, the rapidly dividing leukemia cells can have the appearance of either lymphoid or myeloid cells. CML is characterized by the presence of the Philadelphia chromosome, formed by the translocation of part of chromosome 9 onto chromosome 22. This translocation cause the fusion of 2 genes, called BCR and ABL, and the resulting BCR-ABL fusion is spontaneous active, driving the uncontrolled proliferation of the leukemia cells.

Pharma Models LLC offers a variety of different models for leukemia. Most frequently used are the sub-cutaneous human tumor xenografts, but the majority of the cell lines used in these models can also be injected into immunocompromised mice to initiate a more clinically relevant form of the disease.

There are several cell lines that are commonly used as subcutaneous xenografts in immunocompromised mice, where the cell lines form solid tumors that can be measured and evaluated in the same way that other solid tumors are evaluated. Several examples of typical growth curves are shown in Figure 1. In this example, three leukemia cell lines were implanted subcutaneously in nude mice and the growth of the resulting tumors followed. In this model, treatment would typically begin at a mean tumor volume of 100 mm3, and continue until the negative control tumors reach a volume of 1500 mm3. 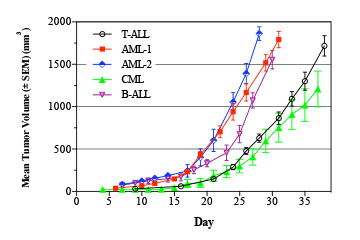 In addition to subcutaneous xenograft models of leukemia, Pharma Models LLC has several luciferase expressing human leukemia cell lines, which can be implanted via IV injection in immunocompromised mice. After implantation, these leukemia cells can be visualized via in vivo imaging colonizing the bone marrow of the mice. 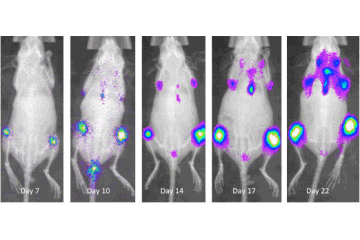