Lung cancer is the most common cancer worldwide, with an estimated 1.8 million cases annually.

Although lung cancer is largely attributable to smoking cigarettes, or secondary exposure to tobacco smoke, the number of cases of lung cancer remains high in the developed world and is rising rapidly in the developing economies as affluence makes tobacco products more affordable. As a result, lung cancer is likely to remain a significant cause of death worldwide for the foreseeable future. Five-year survival for patients with lung cancer is 15%, meaning that there is ample opportunity for new treatments to improve the overall prognosis of lung cancer patients.

Between 80 to 90% of lung cancer cases are caused by smoking tobacco. Lung cancer accounts for 14% of all cases of cancer in the US annually.1 Overall 5-year survival for patients with lung cancer is 15%.2 Diagnosis is generally based on chest X-ray and treatment, while generally determined by the type of lung cancer, usually involves both radiation therapy and chemotherapy.

Treatment for SCLC is generally by radiation and/or chemotherapy and does not commonly involve surgery.3 Chemotherapy usually consists of cisplatin and/or etoposide and combinations of these two compounds with paclitaxel, gemcitabine, vinorelbine and topotecan or irinotecan are also commonly used.8-10

Reports indicate that 10-15% of lung cancers have activating mutations of the epidermal growth factor receptor (EGFR),11 while 2-4% of cases have activating mutations of the related gene HER2. Activations of the Ras and EGFR/Her-2 are almost invariably mutually exclusive, suggesting that each serve as driver mutations for the cancer, rather than incidental mutations that have occurred during the development of the tumor. Mutations in the Met and ALK oncogenes are found in relatively small percentages of patients (1%-7%) and are generally not found in in patients with activations of KRAS or EGFR/Her-2. Activation of the PI3K/AKT/mTOR pathway is seen in approximately 60% of NSCLC cases, but is generally seen in conjunction with either KRAS or EGFR/Her-2 activation and is thought not to be a primary driver of tumor growth. Additionally, mutations have been identified in the Ros-1, RET, FGFR1, and DDR2 oncogenes, as well as numerous tumor suppressor genes, but the exact incidence and role of these mutations in the development of lung cancer is still under investigation.

Pharma Models LLC offers several models of the different types of lung cancer. Most commonly used are the sub-cutaneous human tumor xenografts, and some of the cell lines used in these models can also be implanted orthotopically into the lungs of immune-compromised mice. Some cell lines can be implanted directly into common metastatic sites for human lung cancer, such as the brain and liver.

There are a number of cell lines that are commonly used as subcutaneous xenograft models of human lung cancer in immunocompromised mice. Several growth curves are shown in Figure 1. In this example, four lung cancer cell lines were implanted subcutaneously in nude mice and the growth of the resulting tumors followed. In this model, treatment would typically begin at a mean tumor volume of 100 mm3, and continue until the negative control tumors reach a volume of 1500 mm3. 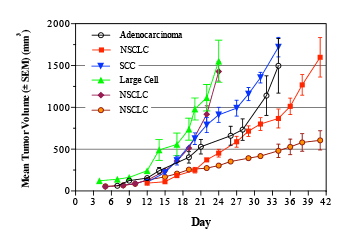 In addition to subcutaneous xenograft models of cancer, cell lines can also be implanted into the lungs of mice as an orthotopic model of lung cancer. Pharma Models LLC has luciferase expressing versions of many of the most commonly used human lung cancer cell lines that can be implanted by intrathoracic injection and monitored by quantifying luciferase expression. An example of the growth of an orthotopic lung cancer model is shown in Figure 2. 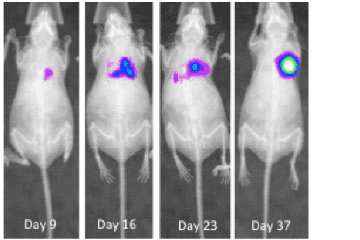 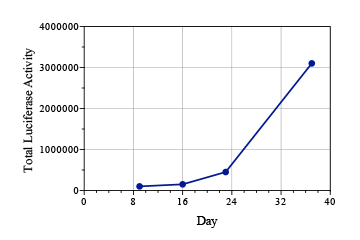 The brain is a frequent site for metastatic lung cancer. Clinically, brain metastases have special relevance because they are potentially more likely to cause death more quickly than the primary lung tumor. Lung cancer metastases in mice can be modeled by injecting tumor cells intra-cranially and then following the progress of the disease through in vivo imaging, survival curves, and ultimately, histologically. With Luciferase labeled lung cancer cells, the tumor can be followed as it progresses, and the extent of tumor growth quantified. An example of the imaging possible is shown in Figure 3. Please contact us for more details of these models. 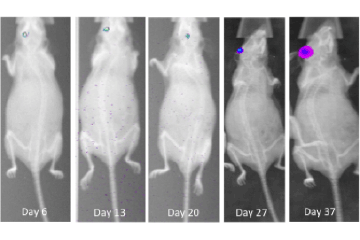 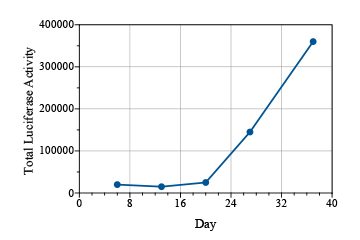 Syngeneic models of cancer allow drugs to be tested in systems with mice that have intact immune systems. Although there are generally fewer cell lines available, the protocol is basically the same as for a human cell line – the cell lines can be implanted subcutaneously, directly into the thoracic cavity, or the model can be run as a metastatic model. Please contact us for details of orthotopic and metastatic syngeneic lung cancer models. 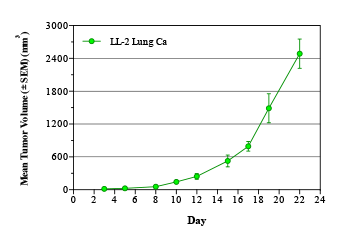