Prostate cancer is cancer that develops in the prostate gland of the male reproductive system.

There are an estimated 2.7 million men worldwide living with a diagnosis of prostate cancer, and 15% of men will be diagnosed with prostate cancer at some point during their lives.

Treatment options for prostate cancer are generally based on a histological score known as a Gleason grade, after the pathologist who developed it. In this scoring system, the tumor is given 2 grades based on 5-point scoring scale of the dominant and secondary histological pattern. The final Gleason score is the sum of the 2 grades. Scores higher than 7 are considered aggressive and treated accordingly, while scores of 5 or below are regarded as low grade and treated conservatively.5

The overall picture of a genetically diverse cancer with an unclear relationship between biology and treatment options suggests a fertile field for target-based pharmaceutical development.

Pharma Models LLC offers a variety of different models of prostate cancer. Most commonly used are the sub-cutaneous human tumor xenografts, but many of the cell lines used in these models can also be implanted directly into common metastatic sites for human prostate cancer – lung, liver, bone and brain.

There are several cell lines that are frequently used as subcutaneous xenografts in immunocompromised mice. Several examples of typical growth curves are shown in Figure 1. In these examples, three prostate cancer cell lines were implanted subcutaneously in nude mice and the growth of the resulting tumors followed. In this model, treatment would typically begin at a mean tumor volume of 100 mm3, and continue until the negative control tumors reach a volume of 1500 mm3. 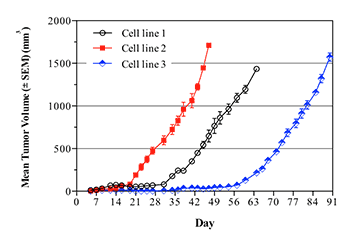 Metastatic cancer is of tremendous clinical importance, and this is true for prostate cancer. Prostate cancer commonly metastasizes to bone, lymph nodes, liver, lungs and brain. While lymph node metastases are difficult to model in mice, metastatic prostate cancer in the brain, lung or liver is possible.

Pharma Models LLC has developed a metastatic prostate cancer models in the mouse brain, lungs and liver through the direct injection of prostate cancer cells, followed by careful monitoring of a period of 4-5 weeks. Endpoints include survival and histology. Pharma Models LLC has several breast cancer cell lines that express luciferase and can be used to evaluate the treatment of metastatic prostate cancer in the brain (see Figure 2), in the lungs (Figure 3) or in the liver (Figure 4). Please contact us for more details of these models. 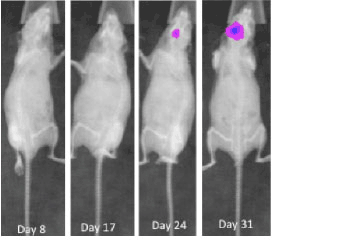 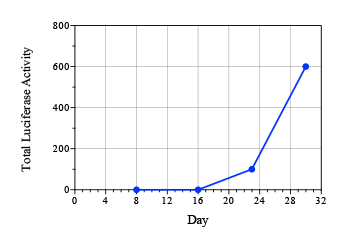 Figure 2. Metastatic Prostate Cancer in Brain. This image shows a nude mouse with a human prostate cancer cell line implanted in the brain. Luciferase expressing cells were implanted by direct injection into the brain of nude mice. Tumor growth was visualized with D-luciferin 8, 17, 24 and 31 days post injection. 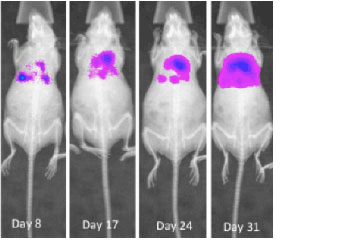 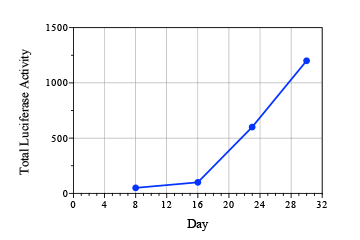 Figure 3. Metastatic Prostate Cancer in Lung. This image shows a nude mouse with a human prostate cancer cell line implanted in the lung. Luciferase expressing cells were implanted by direct injection into the thoracic cavity of nude mice. Tumor growth was visualized with D-luciferin 8, 17, 24 and 31 days post injection. 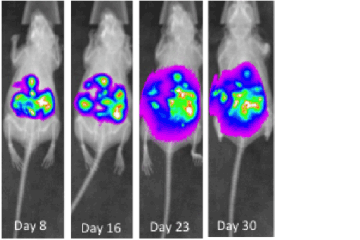 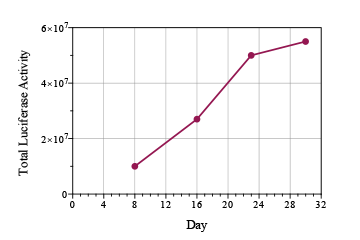 Figure 4. Metastatic Prostate Cancer in Liver. This image shows a nude mouse with a human prostate cancer cell line implanted in the liver. Luciferase expressing cells were implanted by direct injection into the liver of a nude mouse. Tumor growth was visualized with D-luciferin 8, 16, 23 and 30 days post injection.